New research has shown that  a corroded, damaged helmet unearthed in Yarm, Stockton-on-Tees, in the 1950s is a rare, 10th century Anglo-Scandinavian (Viking) helmet, the first ever found in Britain and only the second nearly complete Viking helmet found in the world.

Here we share the story of The Yarm Helmet.

Discovery of the Yarm Helmet 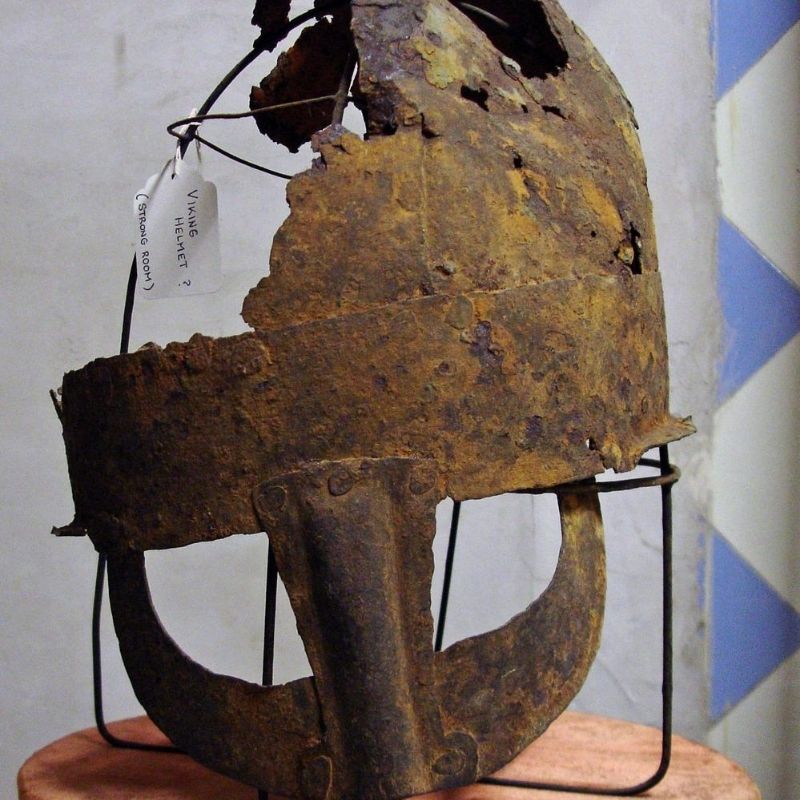 In the 1950s, workmen digging trenches for new sewerage pipes in Chapel Yard, Yarm, made an unusual discovery – a battered helmet. Known locally as the ‘Viking helmet’, it has been on loan to Preston Park Museum from Yarm Town Council for a number of decades. It had never previously been researched and the age of the helmet had caused much debate until now.

In recent years a project led by Dr Chris Caple, Emeritus Reader at Durham University, has been underway to discover new information about the helmet and the findings have just been reported in the journal Medieval Archaeology 64/1.

The research has focussed on determining if the helmet is genuine and this involved analysing its materials, how it was made, its shape and functional features. If it was genuine how had it survived in the damp earth of the tidal riverbank of the River Tees?

Yarm may not be where you would expect to find a Viking helmet. The only previous find of this date from Yarm was a piece of 9th century cross shaft, which is now in Durham Cathedral. There are however many pieces of Viking age sculpture that belong to St. Martin’s Church, Kirklevington, most of which are on loan to Preston Park Museum. This could indicate that Yarm was a Viking market place with the merchants and leaders living in the Kirklevington area, 1.5 miles away. The helmet dates to before the establishment of the town and was found on the east side of the loop in the river, an area that could have been a quayside.

What was the helmet made from?

The helmet is made of iron bands and plates, riveted together, with a simple knop at the top. Below the brow band there is a spectacle (eye) mask and the lower edge of the brow band is pierced with circular holes, where a mail curtain may have been attached. The damage to the helmet is consistent with an object being hit by a plough or spade whilst buried. 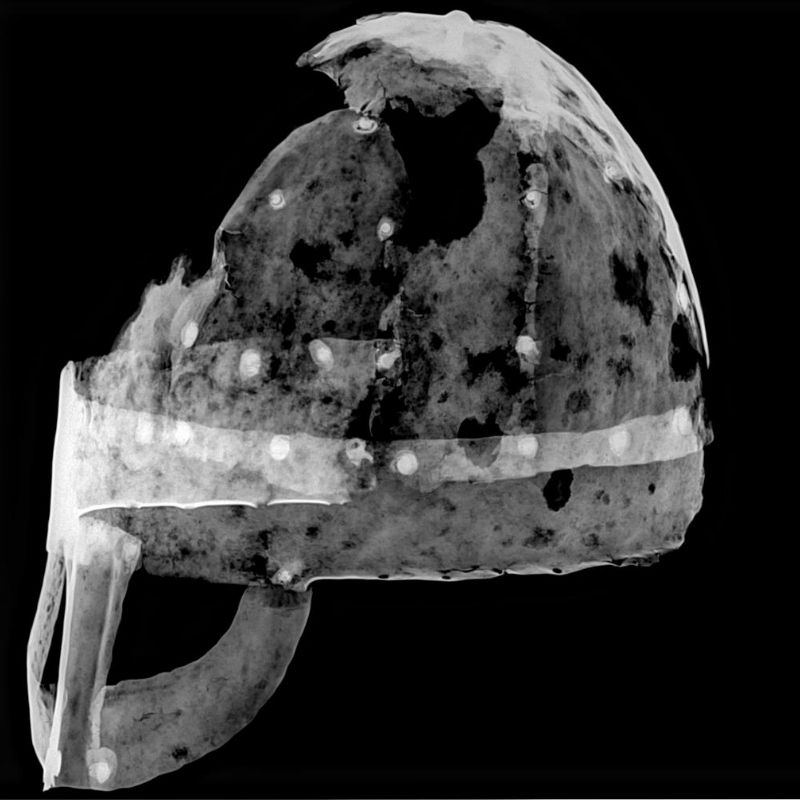 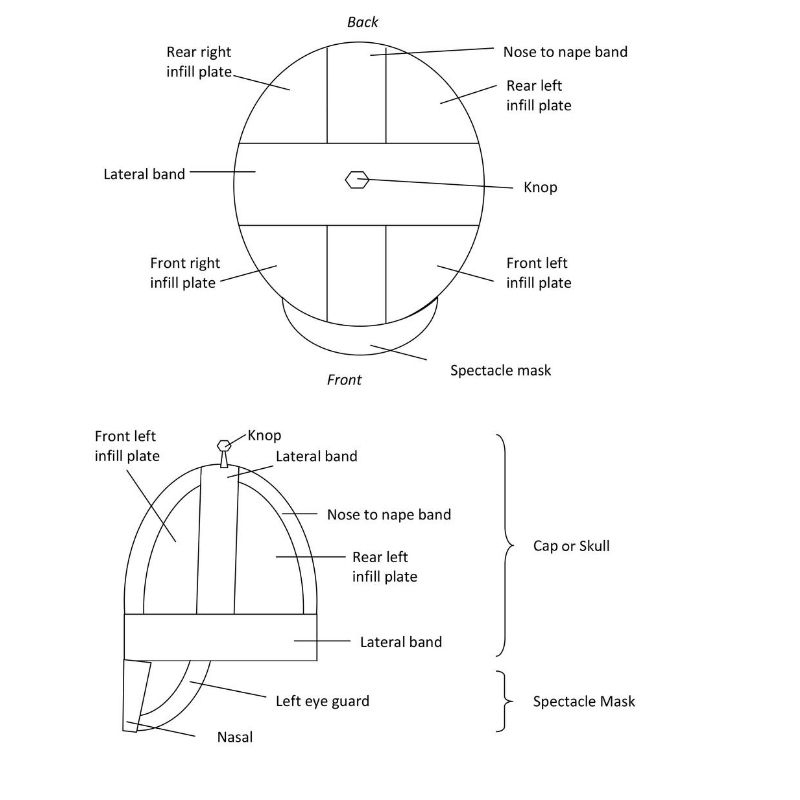 The hammer marks covering the surface and ragged edges of the infill plates show the helmet was made at a blacksmiths forge without benefit of additional refinement. The rivet holes were punched through hot metal from the outer side, ensuring a smooth exterior that would not catch bladed weapons. The out turned lip of the brow band was a later alteration, pushing the mail curtain away from the neck, possibly to protect an injury.

The circumference of the helmet is similar to that of other early medieval helmets and would have been worn over a padded cap around 16mm thick. The metal is 1-2mm thick and would absorb the impact from a weapon.

Samples from the helmet were analysed and shown to be made of an iron, whose composition is typical of the early medieval period. There is no evidence that the helmet was decorated, while the minerals found in the helmet suggest that it was initially buried in waterlogged conditions. Was it deliberately hidden and then not retrieved because something happened to the owner?

Who would have worn the helmet?

The construction of the helmet is workmanlike and indicates that it was intended for use, not display. This fits with its suggested date of being Anglo-Scandinavian (Viking). By the 11th century armies were larger and used tactics such as shield walls with archers raining arrows down, as shown in the Bayeux Tapestry. This differs from the individual combat of an earlier period where the use of armour would not have been necessary. The lack of armour, helmets and mail hauberks (shirt of chain mail), was considered a key factor in the Vikings losing the battle of Stamford Bridge in 1066.

The first Anglo-Scandinavian helmet to be found in Britain

Helmets were scarce throughout North-West Europe in the 6th to 8th century and only the richest male graves contained them. Highly decorated, they were a symbol of authority rather than for protection. A number have survived because they were buried as grave goods. In the 9th–11th century the helmets are practical and undecorated but far more common, however they rarely survive as they were recycled not buried as grave goods.  The Yarm helmet now joins the Gjermundbu helmet, Norway, as the second example from this period.

The iron of which the helmet is made, its method of manufacture, its shape, even its plain functional nature correspond well with a 10th century date. The spectacle mask suggests an object of Anglo-Scandinavian heritage. All the evidence points to this being a rare early medieval helmet which was most probably made and used in the north of England in the 10th century.

The Yarm helmet, the first relatively complete Anglo-Scandinavian (Viking) helmet found in Britain and only the second discovered in north-west Europe. 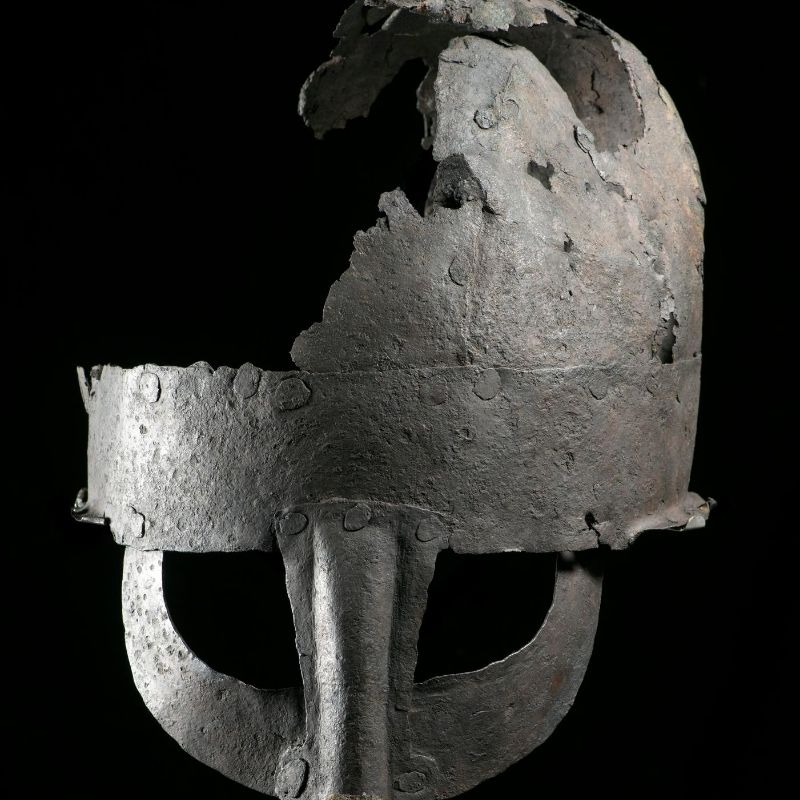 The Yarm Helmet can be seen at Preston Park Museum in Stockton, tickets must be pre-booked online at prestonparkmuseum.co.uk/book-your-visit (tickets will be available to book one week ahead of visiting, normal museum admission applies).