Today marks 75 years since the guns fell silent at the end of the Second World War. This year the government moved the early May bank holiday to the 8th so that commemorative ceremonies, processions and celebratory street parties could take place up and down the country. Many of these events have had to be cancelled or scaled back because of COVID-19 guidelines, but in these difficult times acts of remembrance are even more poignant. While today we may be celebrating VE Day 75 at home and on our doorsteps, we still come together to mark this historic occasion and to learn from the experiences and resolve of the Second World War generation.

Britain in wartime had a strong community spirit that went above and beyond class barriers. After five years of enduring bombings, rationing and evacuation of children to the countryside, VE Day in 1945 saw a tired and exhausted country who were justly proud of their role in the Second World War. Celebrations erupted through Europe, and more than one million people gathered in the streets throughout Great Britain to mark the day.

These items have been chosen to mark Victory in Europe Day and relate to life in Britain during the Second World War. Those who were left at home faced years of uncertainty, fear and the upheaval of their daily lives, they lived with the threat of air raids, gas attacks and night-time blackouts. The destruction of war required more help than ever before, and members of the public surged to donate and volunteer. Men and women volunteered for the Home Guard, the Women’s Voluntary Services, the British Red Cross, and many other organisations. The rallying of the British public on the Home Front was a heroic effort that we commemorate today. 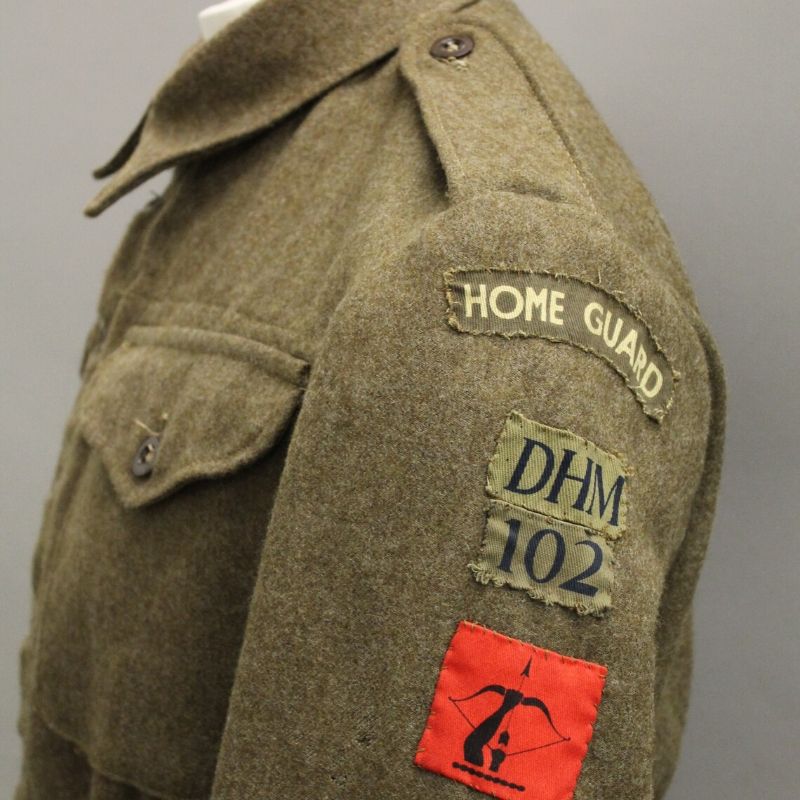 An armed citizen militia, the Home Guard, supported the British Army during the Second World War. With 1.5 million members, it was generally made up from those who were otherwise ineligible for military service. They acted as a secondary defence force in case Nazi Germany succeeded in invading Britain, and some units were even trained in guerrilla warfare should the worst happen. They were trained to guard coastal towns and important areas such as airfields and factories. This jacket is a typical Home Guard jacket of the time. 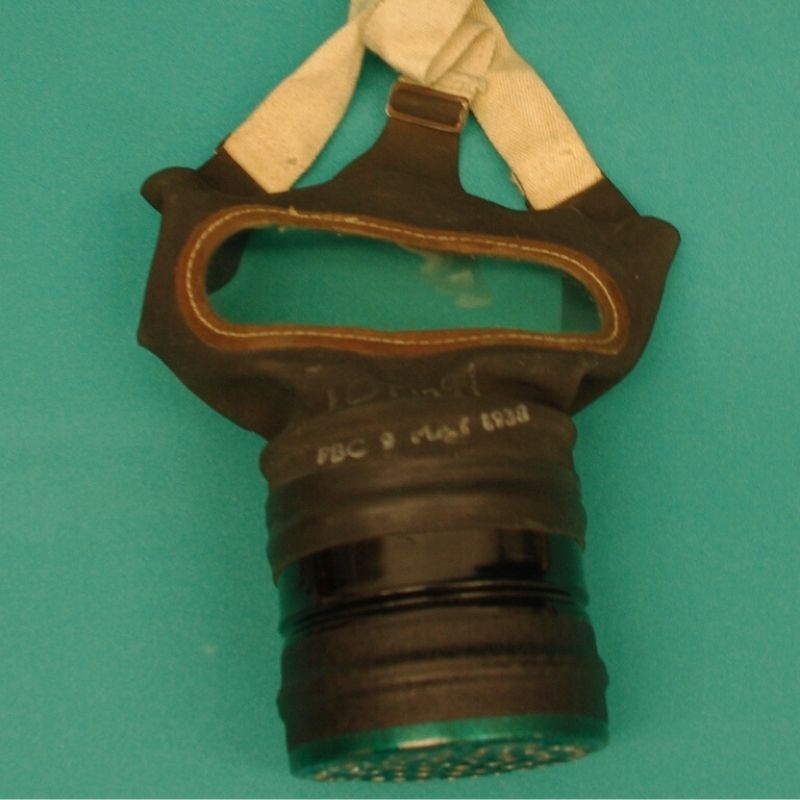 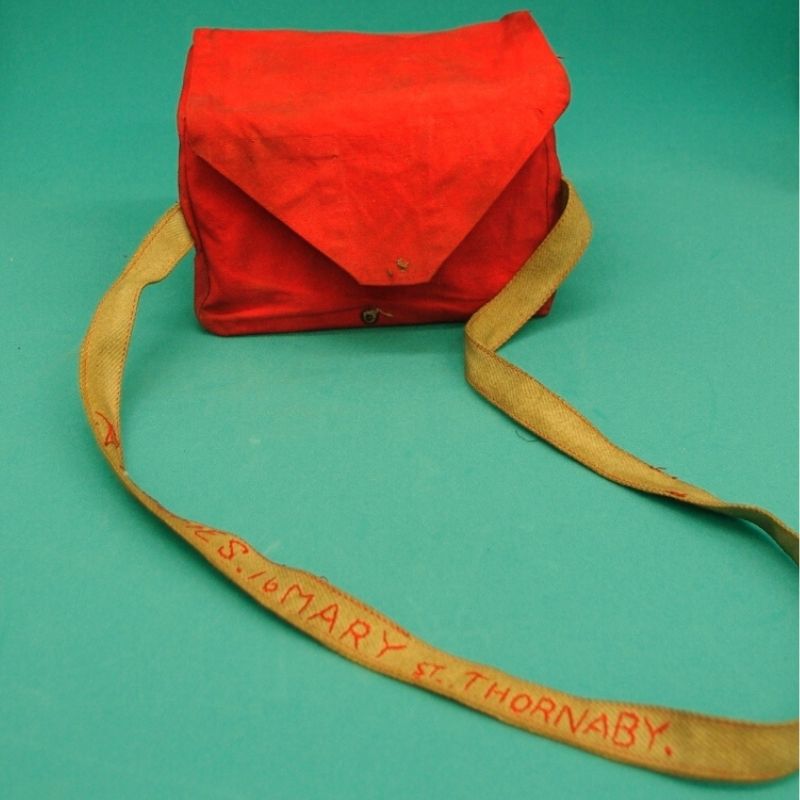 Gas had been used as an effective weapon on British soldiers in the First World War. With the threat of Nazism growing in the 1930s, Britain braced itself for the possibility of gas attacks on the public. 38 million gas masks were distributed to the public along with air raid shelters, notably the Anderson and the Morrison shelters. This particular gas mask was given to a lady in Stockton in 1938 and was known as the ‘Civilian Respirator’. 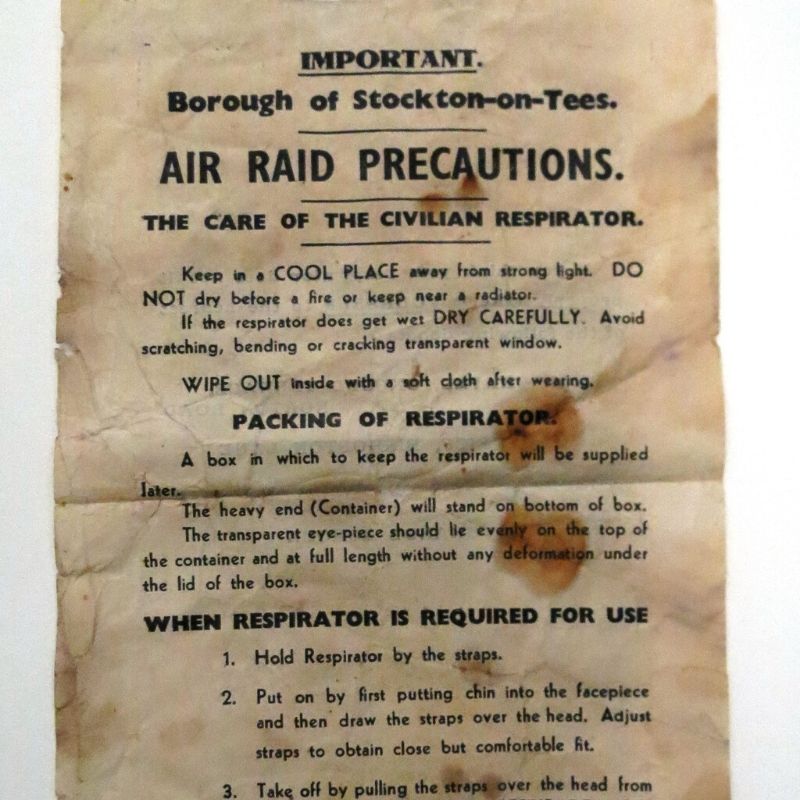 This letter was issued by the Town Clerk of Stockton on Tees in 1938, and was to accompany all gas masks given to the people of Stockton. It lists instructions on the appropriate use of the civilian respirator. It details the correct way to put on, remove it and care for it at home. 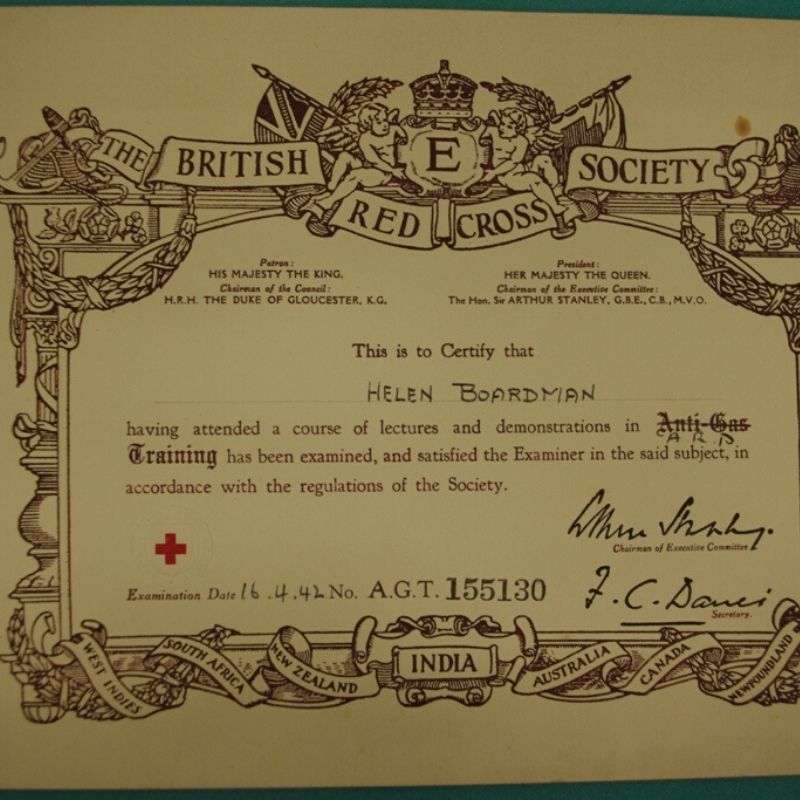 This certificate was awarded to Helen Boardman upon completion of her ARP training in 1942. ARP Wardens had a range of responsibilities including; sounding air raid sirens, directing people to shelters, issuing and checking gas masks, performing first aid on bombing victims, and evacuating people from areas around unexploded bombs. Women were mostly involved through the Women’s Voluntary Service. In all, nearly 1.5 million men and women served within the ARP organisation. 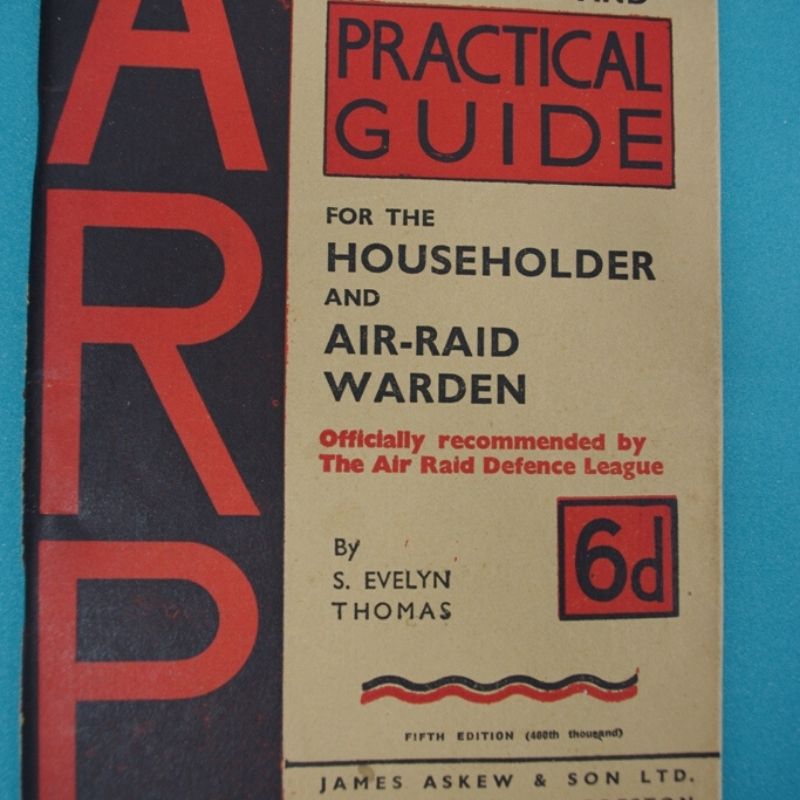 This guide was issued to ARP Wardens and was a concise summary of what to do in the event of an aerial attack. 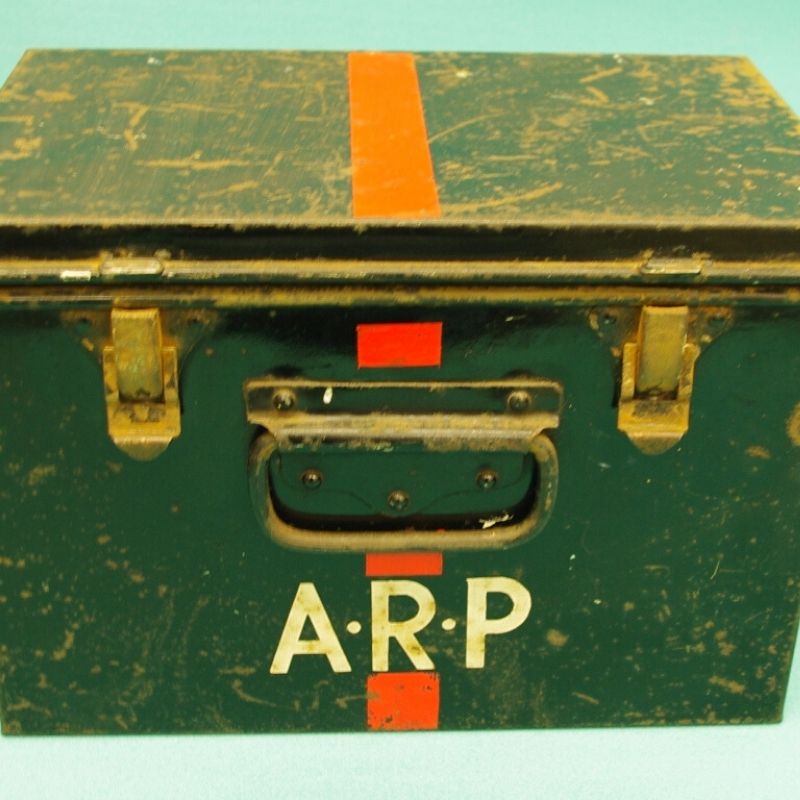 A core aspect of the role of an ARP warden was to provide immediate medical assistance to victims of bombings as they were often the first on the scene. All wardens were issued with first aid boxes that were filled with the necessary supplies to deal with wounds until an ambulance became available. This includes bandages, dressings, anti-gas ointment and a first aid book from St John’s Ambulance. 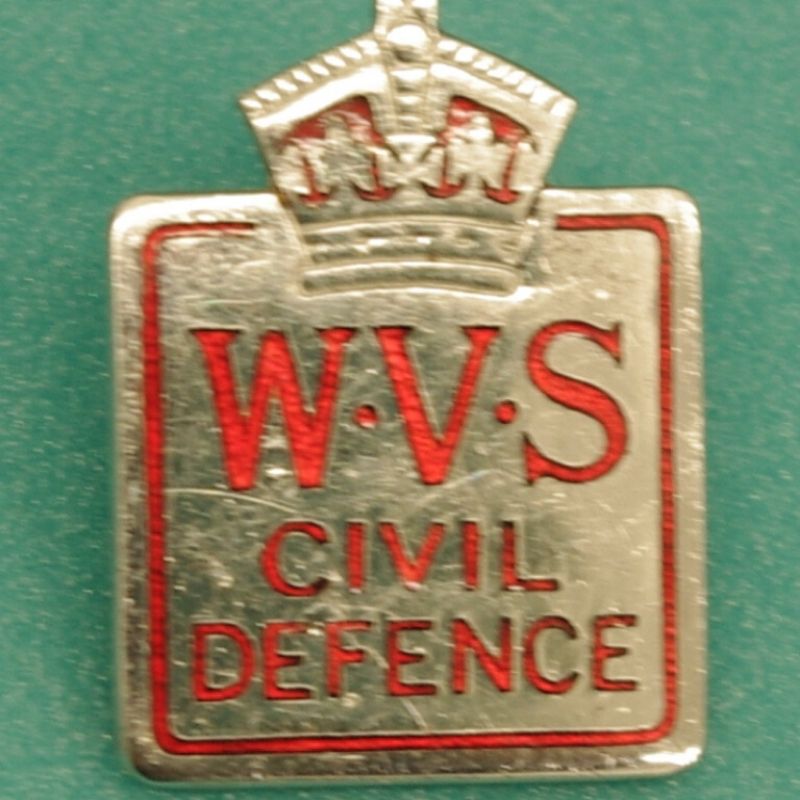 The WVS was a purely voluntary service that had no internal ranks. During the Second World War, there were 2000 WVS centres around Great Britain, each one prominently positioned within a town or village. Women who were recruited played a key part in the evacuation of children and civilians, helping 1.5 million people out of large cities. They also collected clothing required for the needy and helped soldiers who had returned home from the front. The WVS set up mobile canteens during air raids, looked after the injured and those who lost their homes – helping up to 10,000 people each night of the Blitz. This pin belonged to a lady in Stockton who served with the WVS during the Second World War. 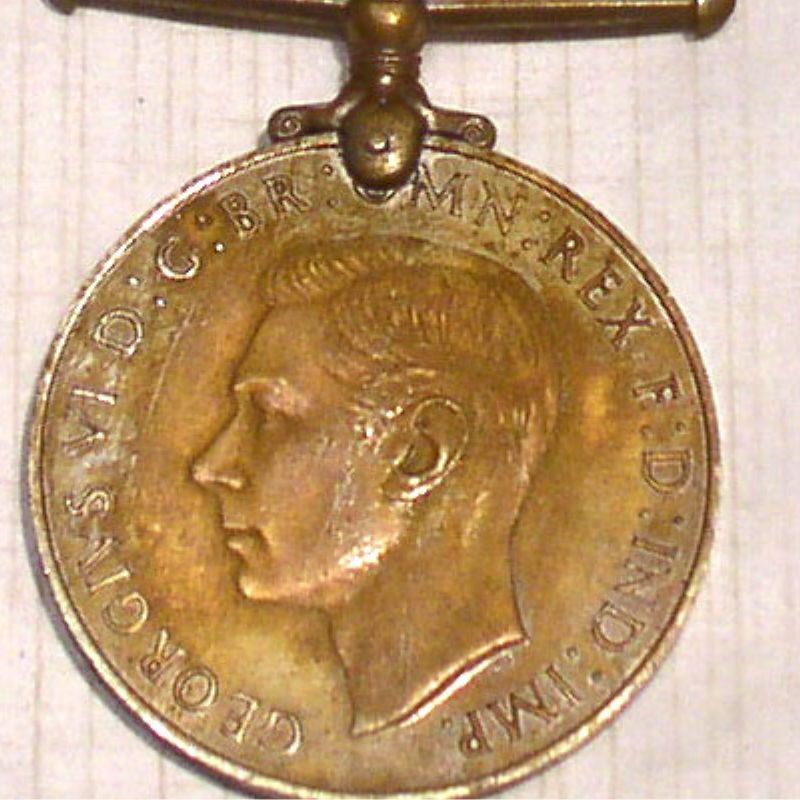 The Defence Medal was awarded between 1939 and 1945 to both military and civilian services. For civilians, this included the Wardens Service, the Women’s Voluntary Services, the Rescue Service, National Fire Service and the Ambulance Service, amongst others. It was awarded to those who had served at least 1080 days between the start and end of the Second World War. It was also awarded automatically to anyone serving in these areas who died whilst fulfilling their duties, without regard to their length of service. 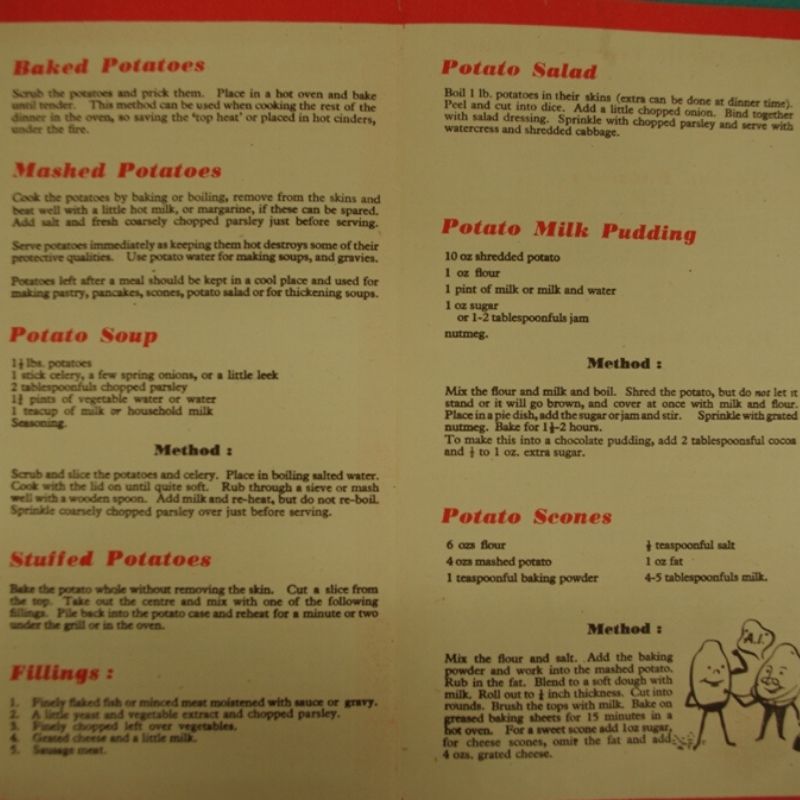 Written and published by the Ministry of Food, these give recipe ideas and advice on using the most of the food available to the general public in a time of rationing. Many people were living off the vegetables that could be grown in their garden, alongside cheese and dried eggs. They helped the public learn about frugality and healthy eating, whilst giving advice on food storage and preparation. These leaflets are focused on carrots, cheese, potatoes, and powdered eggs. 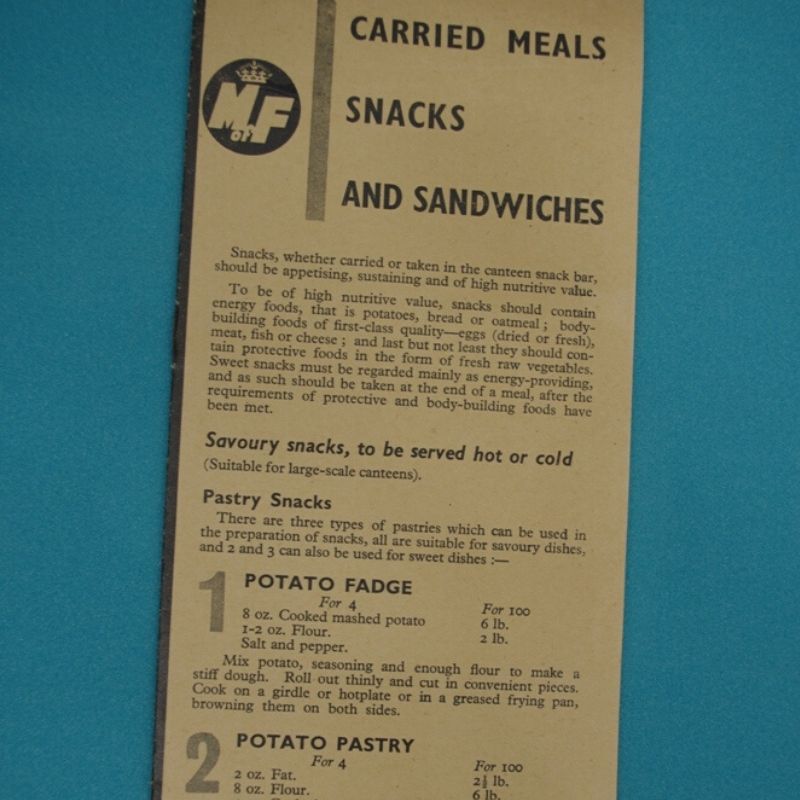 This leaflet was published by the Ministry of Food and was specifically aimed at those who were not staying at home during the day. It detailed food that could prepared for work, as large numbers of women who would normally have been ‘at home’ were now working. It provided recipes and an ingredients list for either four people, or for 100 people if there was a canteen where food needed to be served.